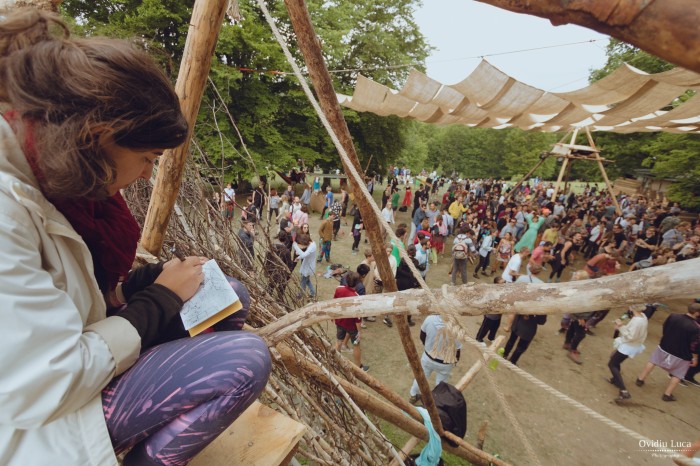 I joined my friends Nayan crew to instal the Sand Portal in WAHA festival, Romania. Luckily, a friend of them let us borrow his van so we could drive the installation packed on a trailer for 1700km, and reach the mountains of Micfalau.

WAHA is a very beautifuly located and friendly festival, with great music (techno, psytrance, live concerts), great art and stage designs and a cosy camping in the forest.

The Sand portal made by Nayan crew is a 3m wide light table made of plywood and acrylic that allows people to draw with sand on its enlightened surface. Around 10 people can draw at the same time, sitting on the bench around the table or directly on its center, allowing them to interact and create together. The light is constantly changing thanks to LED animation previously programmed and recorded.

The light table was designed and pre-built in a collective workshop in Strasbourg, so we only had to put it together on site, create some shading and paint a few last patterns.

The Sand portal is now set up in other festivals around France, like Hadra.

Here’s the diary I illustrated on the way

Some more photos taken during the festival by :